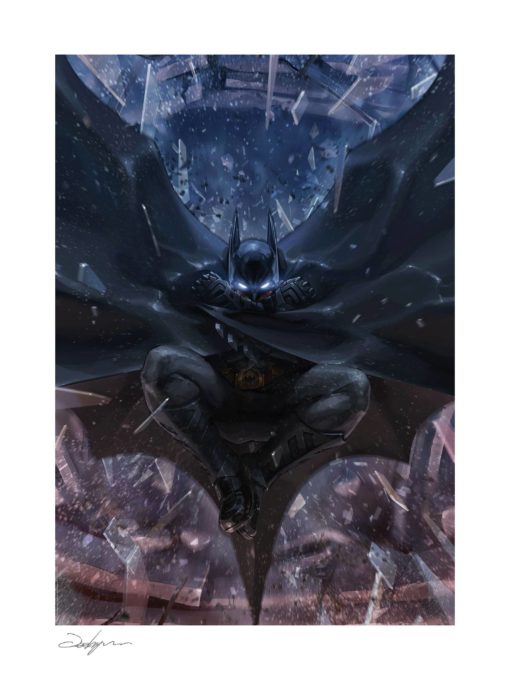 FREE Shipping to the UK
Earn 135 Points with this purchase!
Estimated Release: October 2021.

The Bat takes wing in this action-packed DC Comics art print, viewed from a dramatic perspective as Bruce Wayne’s cowled alter-ego descends from the skylight of a Gotham City warehouse. Glass shatters around him as Batman’s cape unfurls to recreate his iconic winged logo and his eyes shine in the darkness, sights fixed on bringing justice to his city. This terrifying perspective on the Dark Knight is the last thing the criminals of Gotham will ever see before getting thrown behind bars- lucky for you, you’re just a bystander.

Originally created as a variant cover for The Batman’s Grave #1 (2019), written by Warren Ellis for DC Comics, this comic book artwork is available in a fine art format for collectors. Each print in the limited edition of 425 pieces features an authorized, automated artist signature and an embossed Seal of Authenticity. Batman collectors and comic readers alike won’t want to miss out on this dynamic DC Comics art print.

Dig a little deeper into the shadows of Gotham and bring home The Batman’s Grave #1 Fine Art Print by Jeehyung Lee today.