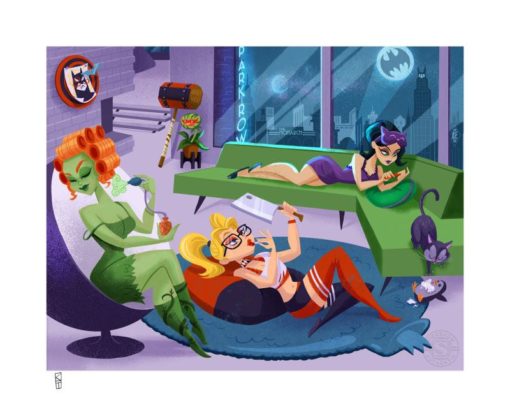 FREE Shipping to the UK
Earn 110 Points with this purchase!
Estimated Release: June 2021.

They say there’s no rest for the wicked, but Gotham City’s most famous femme fatales get the night off in this colorful composition illustrated in Hudson’s signature retro-futuristic style. Cozy up with Catwoman, Harley Quinn, and Poison Ivy as they settle in for a sleepover above the crime-ridden streets. While Pamela tries out her perfume, Selina sharpens her claws and Harley uses a meat cleaver as a mirror to give herself a stylish makeover. Packed with Easter eggs and finished with a glistening Gotham skyline, this fun and flirty fine art print is a must-have for fans of DC Comics and Batman’s rogues gallery.

Each Sleepover Sirens Fine Art Print features an authorized, automated artist signature and an embossed Seal of Authenticity as a part of the limited edition of 400 pieces. Inspired by the stylings of the Unruly Industries™ Sleepover Sirens Designer Collectible Toy Set by Cameron Scott Davis, this print makes a perfect pairing with any Catwoman, Poison Ivy, or Harley Quinn collection.

Consider this your invitation to the most super-powered slumber party in Gotham! Bring home the Sleepover Sirens Fine Art Print by Kat Hudson today.