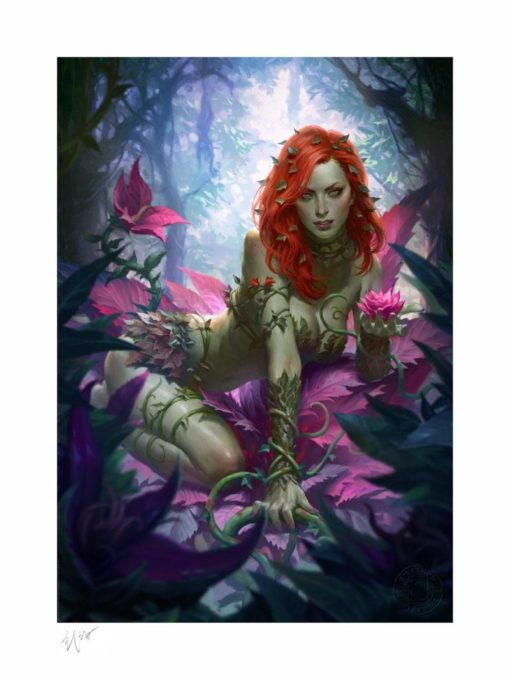 FREE Shipping to the UK
Earn 125 Points with this purchase!
Estimated Release: August 2021.

“Welcome to the dusk of man. The age of flora has dawned.”

“Welcome to the dusk of man. The age of flora has dawned.”

As lethal as nightshade, Poison Ivy is completely in her element in this beautiful botanical portrait that catches the villainess reclining on a bed of thorny pink plants. The floral femme fatale holds a delicate rose in her hand, offering it to her next smitten victim while curious vines twist and turn around her. In this uniquely detailed scene, the jungle takes on cooler color scheme and Pamela Isley herself appears paler and more in tune with her sinister side surrounded by the strength of nature. Always remember- even the prettiest plants can disguise the deadliest poison.

Each Poison Ivy Variant Fine Art Print features an authorized, automated artist signature and an embossed Seal of Authenticity as a part of the limited edition of 375 pieces. Available in framed and unframed presentations, this dazzling display piece is a must-have for any fan’s DC Comics collection.

Weed out the weaklings and bring home the Poison Ivy Variant Fine Art Print by Heon-hwa Choe for your rogues gallery of Batman collectibles today.