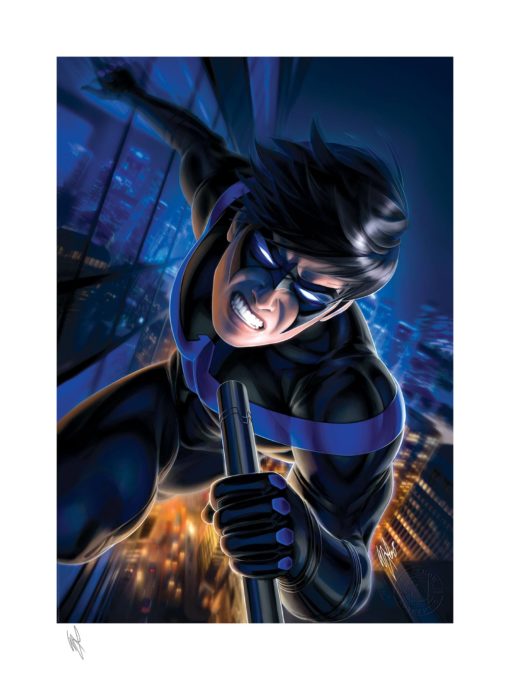 FREE Shipping to the UK
Earn 135 Points with this purchase!
Estimated Release: September 2021.

In this action-packed portrait, the acrobatic Dick Grayson takes to the skies over Bludhaven, the base of his crimefighting operations. Nightwing has stepped out of Batman’s shadow, working to tackle corruption in the streets of New Jersey with his strength, dexterity, and battle-prowess. Running alongside the windowed exterior of a massive building, this flying Grayson is garbed in his modern black and blue costume, ready to get the drop on his unsuspecting targets.

Originally created as a variant cover for Nightwing #60, written by Dan Jurgens for DC Comics, this comic book art print is now available for collectors in a fine art format. Each Nightwing Fine Art Print features an authorized, automated artist signature and an embossed Seal of Authenticity as a part of the limited edition of 300 pieces. The Caped Crusader’s former protégé makes a perfect addition to any Batman art print collection.

Leap into action and add the Nightwing Fine Art Print by Warren Louw to your DC Comics collection today!