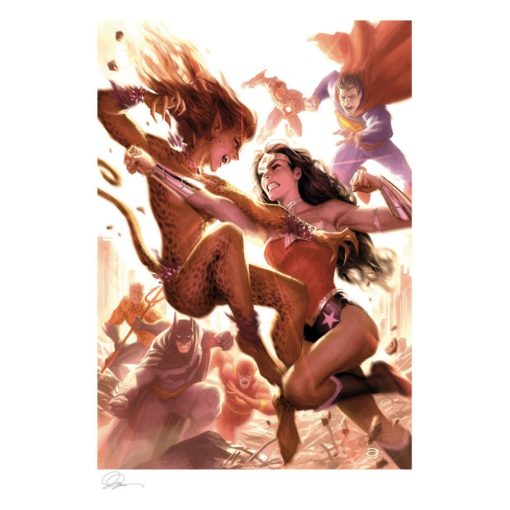 FREE Shipping to the UK
Earn 125 Points with this purchase!
Estimated Release: September 2021.

Aquaman, Batman, The Flash, Cyborg, and Superman all rush to try to stop the raging battle in the Justice League: Wonder Woman vs Cheetah Fine Art Print. Alex Garner captures the tension of a decades-long rivalry through dramatic lines of action and intense expressions, as Diana of Themyscira and Barbara Ann Minerva throw earth-shattering punches at one another.

Originally created as a variant cover for Justice League Vol. 2 #13, written by Geoff Johns for DC Comics, this action-packed illustration is now available in a fine art collectible format. Each Justice League: Wonder Woman vs Cheetah Fine Art Print features an authorized, automated artist signature and an embossed Seal of Authenticity as a part of the limited edition of 400 pieces.

Race to save humanity and add the Justice League: Wonder Woman vs Cheetah Fine Art Print by Alex Garner to your DC Comics collection today.