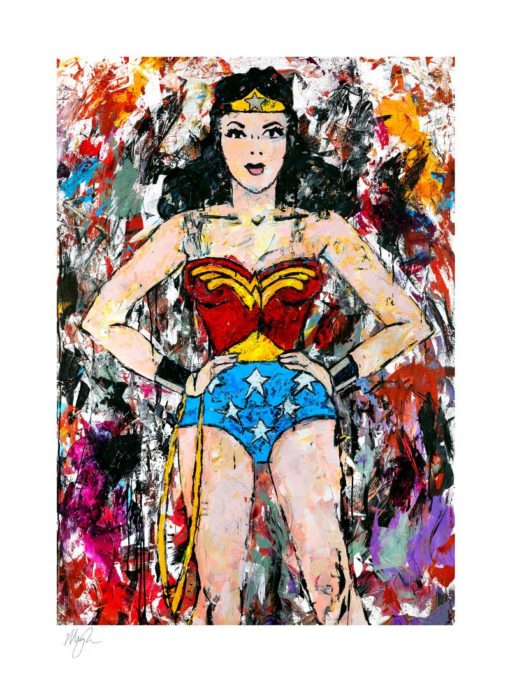 “Of all people, you know who I am…who the world needs me to be. I’m Wonder Woman.”

“Of all people, you know who I am…who the world needs me to be. I’m Wonder Woman.”

Wonder Woman made her comic book debut in Star Comics #8 in 1941, and in 1986, legendary comic artist Trina Robbins became the first woman to ever illustrate the character. Knappenberger pays homage to Robbins in this colorful composition by depicting Wonder Woman in the trailblazer’s iconic art style, which itself was a tribute to the character’s Golden Age roots.

“When I look at this painting, I not only see myself, but I see all of us,” says Knappenberger. “The background of this painting is textured, messy, and maybe even a little wild. Whatever is in your background that makes you resilient, that’s what I want you to see here.”

Each Golden Age Wonder Woman Fine Art Print is faithfully reproduced from Megh Knappenberger’s original oil painting, which was created exclusively using a palette knife to produce the vigorously textured, energetic style of each stroke. Each print features an authorized, automated artist signature and an embossed Seal of Authenticity as a part of the limited edition of 275 pieces. Embodying the grace and strength of Wonder Woman as well as the incredible contributions of Trina Robbins and other comic creators, this fine art collectible is a must-have for fans of the Amazon princess.