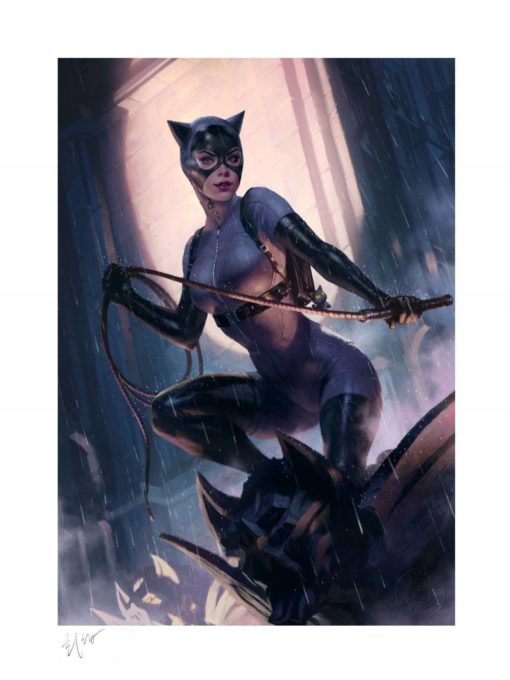 “No one ever finishes that proverb. ‘Curiosity killed the cat… but satisfaction brought it back.'”

“No one ever finishes that proverb. ‘Curiosity killed the cat… but satisfaction brought it back.'”

Look what the cat dragged in! All of Gotham is on the lookout for the city’s craftiest cat burglar as she prepares to make her next steal, disguised in her classic grey and black suit. Holding her signature bullwhip, Catwoman crouches atop a bat-like gargoyle in the shadows while she avoids taking the spotlight- and getting caught in the GCPD searchlight. A little water won’t stop this cat, though, as the rain pours down and completes this scintillating variant portrait of Selina Kyle hiding high above the crime-ridden Gotham City streets.

Each Catwoman Variant Fine Art Print features an authorized, automated artist signature and an embossed Seal of Authenticity as a part of the limited edition of 375 pieces. This limited variant is a DC Comics-inspired collectible that Batman fans won’t want to miss!