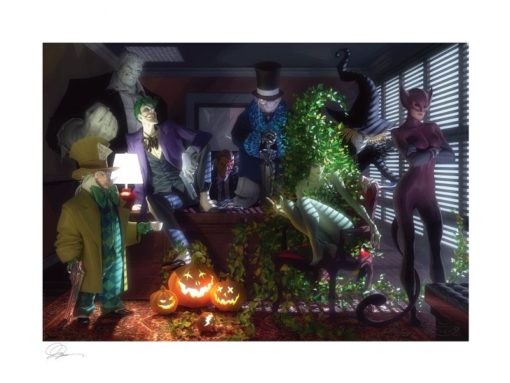 FREE Shipping to the UK
Earn 125 Points with this purchase!

In this vibrant homage to Tim Sale’s iconic splash page from the conclusion of the Batman: The Long Halloween saga, artist Alex Garner skillfully recreates each criminal character in the composition with stunning, lifelike detail. Dynamic lighting gives the scene great tension, casting menacing shadows across the faces of villains like the Mad Hatter, Solomon Grundy, the Joker, Two-Face, the Penguin, Poison Ivy, Scarecrow, and Catwoman in their early days of terrorizing Gotham. United to confront the Dark Knight, the rogues gallery transcends into a cadre of full-fledged supervillains, each smiling or sneering in anticipation of Batman’s next strike.

Each Batman: The Long Halloween Fine Art Print features an authorized, automated artist signature as well as an embossed Seal of Authenticity as a part of the limited edition of 450 pieces. The illustration also has several Easter eggs hidden throughout the scene, so put your detective skills to the test and see what you can spot. Batman fans do not want to miss Garner’s dazzlingly detailed recreation of this iconic DC Comics moment!