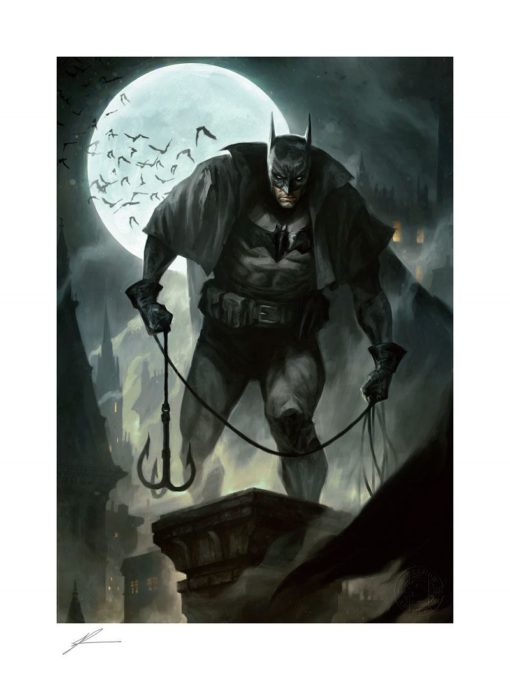 FREE Shipping to the UK
Earn 125 Points with this purchase!
Estimated Release: August 2021.

A timeless terror rises over the cobblestone streets of Gotham City in this foreboding portrait of the World’s Greatest Detective, inspired by A Tale of the Batman: Gotham By Gaslight from DC Comics. Shrouded in mist, the gothic architecture of the city rises in pointed spires beneath the light of the moon while Bruce Wayne, better known as the Batman, stalks the rooftops in search of the killers and criminals that plague his home. With grappling hook in hand, this vintage vision of the Caped Crusader will thrill and chill you to your core as he hunts down Jack the Ripper and puts an end to his gruesome murders once and for all.

Each Gotham by Gaslight Fine Art Print features an authorized, automated artist signature and an embossed Seal of Authenticity as a part of the limited edition of 400 pieces. This moody and macabre illustration of the Dark Knight is a must-have for Batman collectors, especially readers of this acclaimed Elseworlds tale.

Take vengeance on the villains of old and add the Gotham by Gaslight Fine Art Print by Richard Luong to your DC Comics collection today!