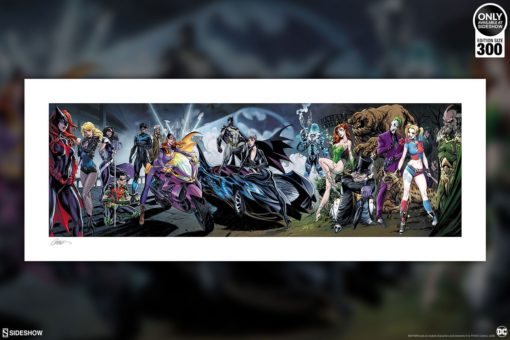 Earn 284 Points with this purchase!

In the Batman #50 Fine Art Print, the Bat-Family and the Gotham Rogues’ Gallery stand opposed on the outskirts of Gotham near the gates of Arkham Asylum. The detailed illustration features Batwoman, Black Canary, Huntress, Red Robin, Nightwing, Commissioner Gordon, Batgirl, Batman, Catwoman, Mr. Freeze, Poison Ivy, The Penguin and his waddle of penguins, Clayface, Joker, Harley and her Hyena, The Riddler, and Ra’s al Ghul. The Bat Signal illuminates the night sky behind them all.

Originally created as a variant cover for Batman #50, written by Tom King for DC Comics, this collection of covers is now available for collectors in a fine art collectible format. Each Batman #50 Fine Art Print is hand-signed by the artist and features an embossed Seal of Authenticity as a part of the limited edition of 300 pieces.