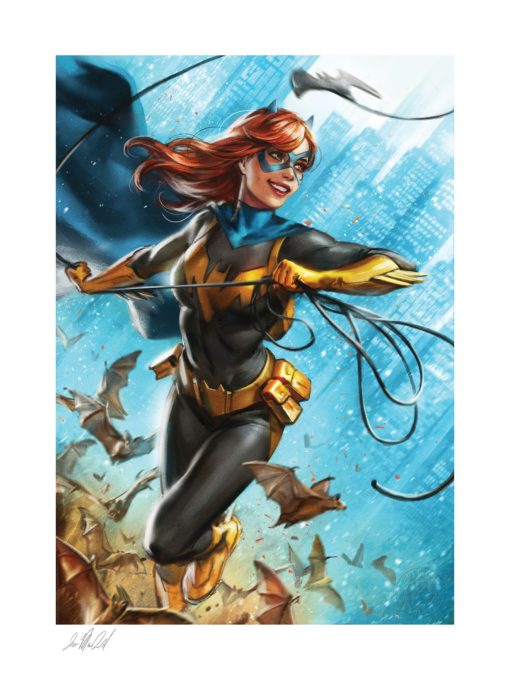 FREE Shipping to the UK
Earn 130 Points with this purchase!
Estimated Release: August 2021.

It’s a bright new day in Gotham as Barbara Gordon leaps into action above the crime-ridden streets. The bat has long served as a symbol of justice in this city, and outfitted in her modern blue, grey, and yellow costume, Batgirl is no different. Our heroine wields her batarang as she is joined by a flurry of bats taking wing, like the clan of crimefighters she calls her own. Rogues, beware! Villains working in the shadows will always have their misdeeds brought to light when the Bat-family is on the case.

Originally created as a variant cover for Batgirl #48 (2020), written by Cecil Castellucci for DC Comics, this comic book collectible makes a perfect addition to any Batman art print collection. Each Batgirl: The Last Joke Fine Art Print features an authorized, automated artist signature as well as an embossed Seal of Authenticity as a part of the limited edition of 375 pieces.

Get the jump on crime in your DC Comics collection and bring home the Batgirl: The Last Joke Fine Art Print by Ian MacDonald today!