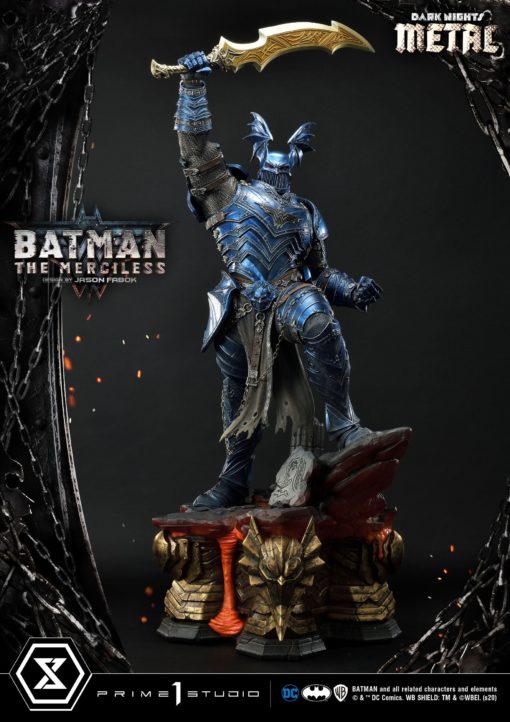 FREE Shipping to the UK
Earn 1,645 Points with this purchase!
Estimated Release: June 2022.

Prime 1 Studio is proud to present the latest addition to the Museum Masterline DC Metal Series! The God of War, MMDCMT-04: 1/3 Scale The Merciless statue!

Prime 1 Studio is proud to present the latest addition to the Museum Masterline DC Metal Series! The God of War, MMDCMT-04: 1/3 Scale The Merciless statue!

Bruce Wayne is back and this time he isn’t playing for the good guys! In a parallel universe, known as Earth -12, Ares, the God of War has created a helmet that amplifies his power a hundredfold! In this universe, Diana, better known as Wonder Woman, teams up with Batman for a period of two years in an attempt to stop Ares from taking over the world. In this attempt to finally kill Ares, Batman dawns the God of War’s helmet despite Wonder Woman’s warning about it’s corrupting influence. In doing this, Batman completely loses his own moral code and becomes mad with power. He kills the love of his life Diana and goes on a slaughtering spree, fully enveloping the mantle of the God of War and becoming The Merciless!

We have captured The Merciless in the most iconic of poses based on the concept by the revered Comic Artist, Jason Fabok. Batman stands 44 inches tall upon a rocky-volcanic themed base. The Merciless holds the infamous God Killer sword high and mighty, ready to destroy anyone who crosses his path.

The base is reminiscent of classic Batman pieces with a gargoyle protruding through the front, following the base theme of trademark gargoyles for all of our Dark Nights pieces! It also features the memorial of Diana, a reminder to all the destruction the helmet could cause. The base, pose, and armor brilliantly come together to convey the essence of his power, vigor, and ruthlessness! We have crafted this Dark Night with the most precise attention to detail to bring you the most comic accurate The Merciless on the market! A must-have for DC Metal fans everywhere!