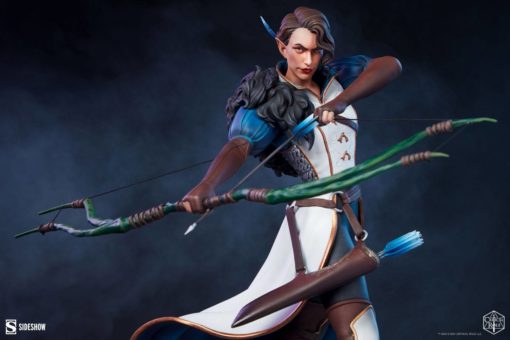 FREE Shipping to the UK
Earn 228 Points with this purchase!
Estimated Release: July 2022.

“Secrets aren’t safe when Vex is around!”

“Secrets aren’t safe when Vex is around!”

Sideshow presents the Vex – Vox Machina Statue, taking aim at the Critical Role collection. This elegant limited-edition collectible measures 11.5″ tall and is fully sculpted to capture the grace and agility of the Grand Mistress of the Grey Hunt.

Vex’ahlia, twin sister of Vax’ildan, is a charming Half-Elf Ranger with a sharp eye and a practical heart, lending her sharpshooting skills to the legendary adventuring party Vox Machina. Shown here as a high-leveled hero, Vex nocks an arrow on her weapon Fenthras, a mythical longbow reclaimed from a corrupted Archfey. Its plantlike limbs have grown and matured with the ranger herself, making her a formidable hunter.

The Vex – Vox Machina Statue features a hexagonal faux-stone figure base engraved with the Vox Machina monogram, complementing her other teammates in the collection. Sculpted in incredible detail, this Critical Role figure is complete with a feather in her hair, a wry smile on her lips, and textures recreating the look of fur and chainmail across her armored form to bring this beloved character to life in three dimensions.

More than a mere trinket, bring home the Vex – Vox Machina Statue for your party of Critical Role collectibles today!