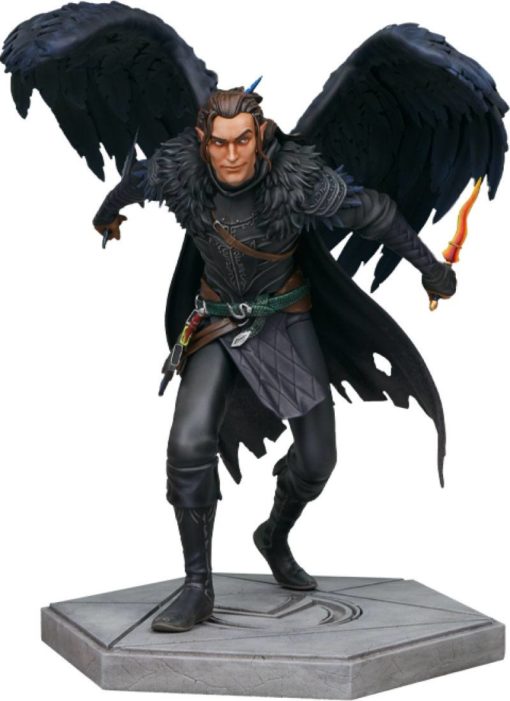 FREE Shipping to the UK
Earn 228 Points with this purchase!
Estimated Release: July 2022.

Sideshow presents the Vax – Vox Machina Statue, sneaking his way into the Critical Role collection. This stealthy limited-edition collectible measures 11.75″ tall and is fully sculpted in the likeness of the Champion of the Matron of Ravens.

Vax’ildan, twin brother of Vex’ahlia, is a cunning Half-Elf Rogue who navigates the shadows with ease as a member of the legendary adventuring party Vox Machina. Shown here as a high-leveled hero, this figure captures his calculated approach to any challenge. The wings of his Deathwalker’s Ward curl protectively around him as Vax moves to deliver a sneak attack from his daggers – Whisper and the Flame Dagger are clutched in his hands, with a third blade, the Poison Dagger, stashed at his hip.

The Vax – Vox Machina Statue features a hexagonal faux-stone figure base engraved with the Vox Machina monogram, complementing his other teammates in the collection. Sculpted in incredible detail, this Critical Role figure is complete with braids in his hair, intricate fur and feather-like elements, and multiple sheathes for his many, many daggers, bringing this beloved character to life in three dimensions.

Pledge yourself to the Matron of Ravens and bring home the Vax – Vox Machina Statue for your party of Critical Role collectibles today!