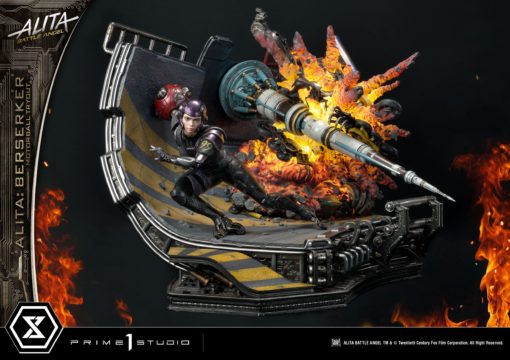 FREE Shipping to the UK
Earn 1,910 Points with this purchase!
Estimated Release: May 2022.

From visionary filmmakers James Cameron and Robert Rodriguez, Alita: Battle Angel is a film based on the popular 1990s manga series Gunnm and the original video animation Battle Angel. The main protagonist is Alita, a female cyborg with no memories of her past. She is taken in by scientist Dr. Dyson Ido and becomes a lethal machine. Alita (named after his late daughter), is adept in the machine-body martial art known as “Panzer-Kurst”. Although her heart and soul are strong, to uncover her mysterious past; she must use her unique fighting abilities to save herself, her family, and the world!

Capturing one of the most epic scenes of the film, we have Alita: Berserker during the Motorball tryout. Alita is shown in an action-packed dynamic pose surrounded by an action-packed environment. Wearing number 99, she is charging forward, Motorball in hand, with an LED illuminated explosion in her wake!

The entire diorama has been carefully crafted with the most screen-accurate elements to bring the full Cyberpunk atmosphere to your collection. From the highly detailed Alita face sculpt, to the sleek design in the base that makes it seem like it is always moving, add the Motorball Tryout Diorama to your collection today for an absolutely sensational masterpiece! A must have for Alita: Battle Angel fans everywhere!