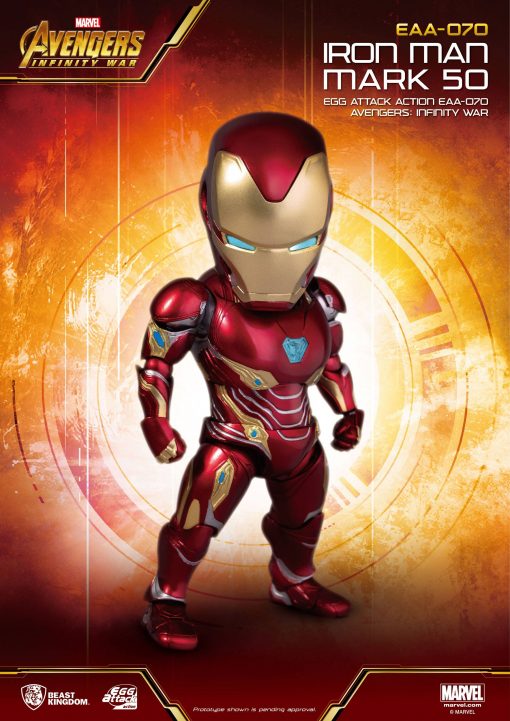 With the fate of the universe at hand and the Avengers reaching breaking point with Thanos’ pursuit for the Infinity Stones, Tony Stark needs to up his game yet again, and argua…

With the fate of the universe at hand and the Avengers reaching breaking point with Thanos’ pursuit for the Infinity Stones, Tony Stark needs to up his game yet again, and arguably delivers the pinnacle of his Iron Man suite development!

Using Nano technology, the entire suite is stored inside the Arc Reactor itself, allowing Tony Stark to summon it at will, and unlike the traditional multi-piece segmented suites, Mark-50 utilizes a much sleeker, ‘organic’ aesthetic, including regenerative abilities.

The EAA-070 comes with a host of extras including the battle ready Rupulsor Cannon, prepped to appear anytime to tear down enemies at will. The added flames for the feet and hands really let Iron-Man soar to new heights! So, ready for flight? Attach the removable Nano Boosters on the back to get the jump on any of Thanos’ minions!

The vivid metallic red, gold and silver accents are complimented with awesome light up elements in the Arc Reactor & eyes, showcasing the great focus on detail befitting of Stark Industries themselves.

So why not continue your Infinity War collection with the all new Mark 50 Egg Attack Action figure, and add this cute yet deadly battle suite to your collection today!