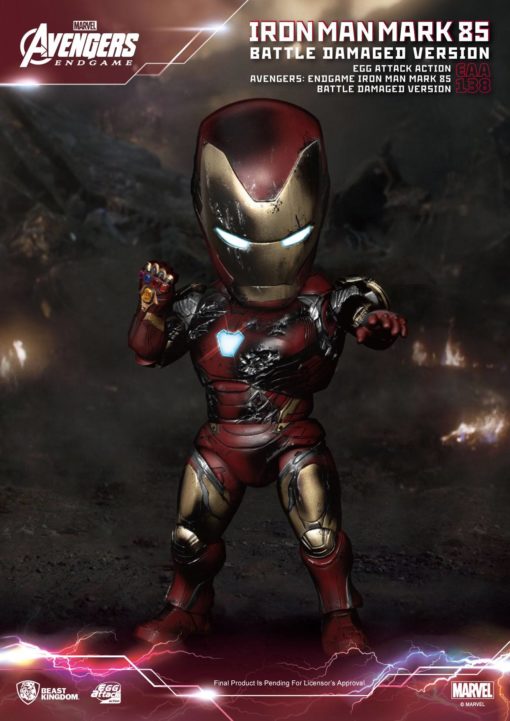 FREE Shipping to the UK
Earn 116 Points with this purchase!
Estimated Release: October 2021.

The climactic battle from Avengers Endgame brought about the largest collection of superheroes from the Marvel Cinematic Universe (MCU) seen on screen yet. Years of world buildi…

The climactic battle from Avengers Endgame brought about the largest collection of superheroes from the Marvel Cinematic Universe (MCU) seen on screen yet. Years of world building, led by Iron Man, meant ‘Earth’s Mightiest Heroes’ faced off against their nemesis Thanos and his evil army of ‘Outriders’. With Tony Stark and his Iron Man alter ego kicking off the MCU, it was also befitting that he finally save the universe and bring balance and order once again, but in doing so offering the ultimate sacrifice through giving his own life! A bitter-sweet ending to his story arc, but one filled with hope and pride for the Avengers.

The ‘EGG Attack Action’ series of 6-inch articulable figures under the Beast Kingdom ‘Entertainment Experience Brand’ proudly recreates the last Iron Man suit built by Tony Stark, The Mark 85, in its final battle-damaged phase. With built in Nano Technology, The Mark 85 was the culmination of all the hard work Tony put into building and enhancing his unique technologies.

The EAA-138 perfectly encapsulates the final moments of Tony Stark’s journey with a heavily detailed depiction of the Mark 85. The damage to the armor is recreated down to the inner exposed machinery of the suit. The helmet, chest arc reactor, and Nano Gauntlet, as well the arm area all light up giving collectors cool ways to show off the EAA-138 in low light settings. This time the non-movable arms detail the damage Iron Man faced at the hands of Thanos. The included Tony Stark face sculpt gives fans the perfect sendoff where Tony finally succumbs to the Infinity Gauntlet Snap injuries, a touching yet befitting end to the charismatic hero!

Finally with a number of replacement hands and a branded figure base with the words ‘I Love You 3000’ etched on the front, fans can be sure to enjoy posing Iron Man and Tony Stark in his final ever scene recreation. Make sure you grab your very own Mark 85 and show Tony some love, 3000 times!