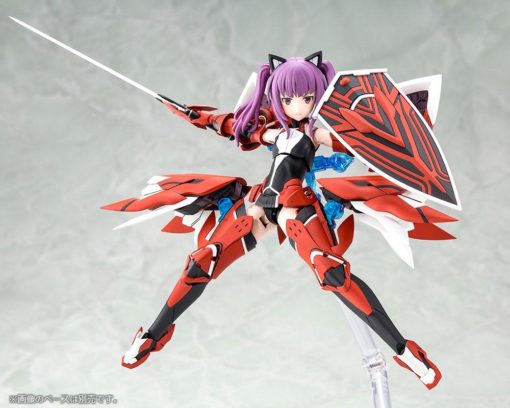 FREE Shipping to the UK
Earn 88 Points with this purchase!
Estimated Release: January 2022.

As an added bonus, the kit comes with a present code to receive an item in the game designed by Humikane Shimada!

The base model for Ayaka Ichijo [Ei-shun] underwent a renewal from the standard Ayaka Ichijo.
To further match the character’s look in the game, newly sculpted three face parts and bangs are included in this kit.

As part of the Megami Device series, the model consists of the base “machinika” body designed by Masaki Apsy and a variety of unique armor and weapons.

With the newly sculpted face parts and bangs, the eye decals have been renewed with R66’s charm, keeping the model kit as close to the original as possible.

– The kit will include a present code for use in the game.
– The kit includes three different newly sculpted pre-printed face parts.
– The included new SP is of clear yellow coloring.
– With the signature gear, the included dual swords, single sword, SP, etc. will allow users to enjoy recreating various combat scenes.
– A cleaning robot in a new color is included as a bonus part.
– The model can be constructed with her signature gear in “Armed Mode,” or without gear in “Unarmed Mode.”
– The model is equipped with 3mm connection joints and includes compatible head parts for users to customize with the existing M.S.G, Frame Arms, Frame Arms Girl, Hexa Gear, and Sousai Shojo Teien plastic model kit series.
– The kit includes a variety of decals for the eyes and other markings.