Metal Gear Solid V: The Phantom Pain, is an open world action-adventure stealth video game developed by Kojima Productions, directed, designed, co-produced and co-written by Hideo Kojima, and published by Konami for Microsoft Windows, PlayStation 3, PlayStation 4, Xbox 360 and Xbox One. It was released worldwide on September 1, 2015.

The game is the eleventh canonical and final installment in the Metal Gear series and the fifth within the series’ chronology. It serves as a sequel to Metal Gear Solid V: Ground Zeroes, and a continuation of the narrative established there, and a prequel to the original Metal Gear game. It carries over the tagline of Tactical Espionage Operations first used in Metal Gear Solid: Peace Walker. Set in 1984, the game follows the mercenary leader Punished “Venom” Snake as he ventures into Afghanistan and the Angola–Zaire border region to exact revenge on the people who destroyed his forces and came close to killing him during the climax of Ground Zeroes.

Originally an assassin for XOF, Quiet later defected to Diamond Dogs after being defeated by Venom Snake.

Quiet wore a minimal amount of clothing at all times because she could only breathe through her skin following parasite-treatment due to the serious injuries she had sustained while trying to kill Big Boss during the hospital raid; wearing too much clothing would lead to suffocation.

After being defeated by Venom Snake in Afghanistan following a tense sniper duel, Quiet became a prisoner at Mother Base until she was allowed to accompany Venom Snake on missions as a buddy.
Her weapons included two lethal sniper rifles nicknamed Wicked Butterfly and Sinful Butterfly as well as the non-lethal Guilty Butterfly. 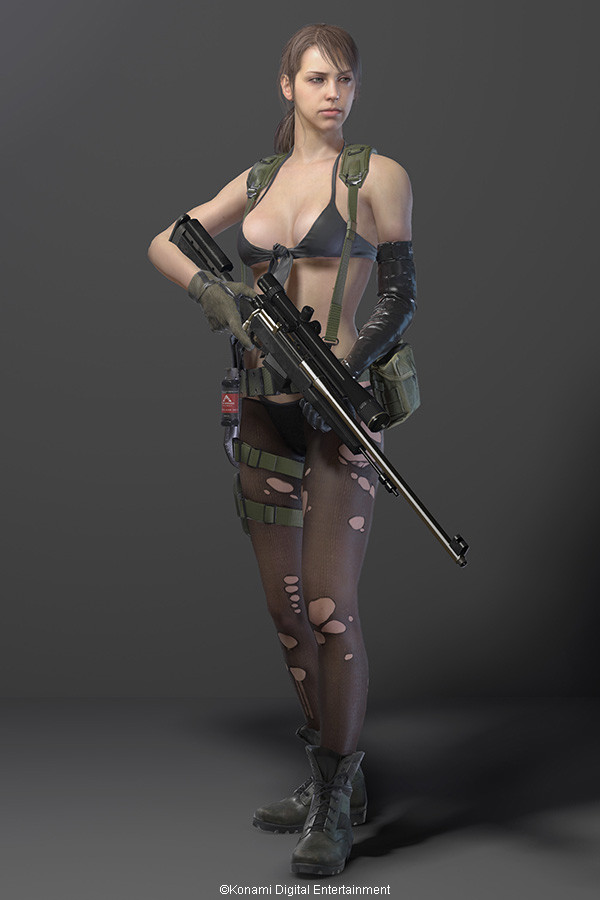 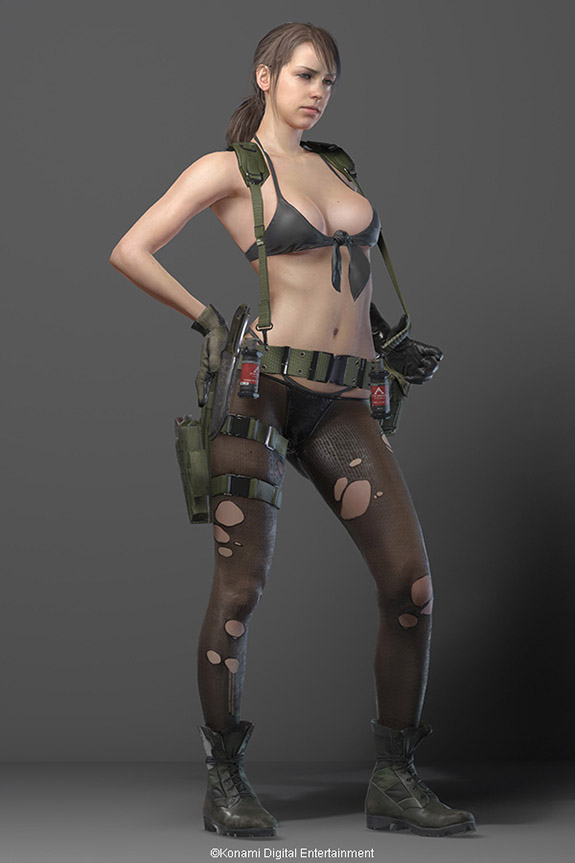 Quiet, the sniper unable to speak from Metal Gear Solid V: The Phantom Pain is recreated as 1/6 scale statue.

Her powerful feminine pose contrasts beautifully with the long and hard sniper rifle in hand. All of the details have been faithfully captured from the smallest bolt on the rifle to the ripped sheer tights on her legs making this an incredibly realistic piece of art! The head is interchangeable with the butterfly mark face. The knife and handgun are detachable from the statue along with the sniper rifle which can be displayed with or without the suppressor.

All her beauty marks are faithfully painted as seen in the model sheet. The display base features the motif of the Aabe Shifap Ruins where she tried to capture Snake.

It stands approx. 30 cm tall and comes in a window box packaging. 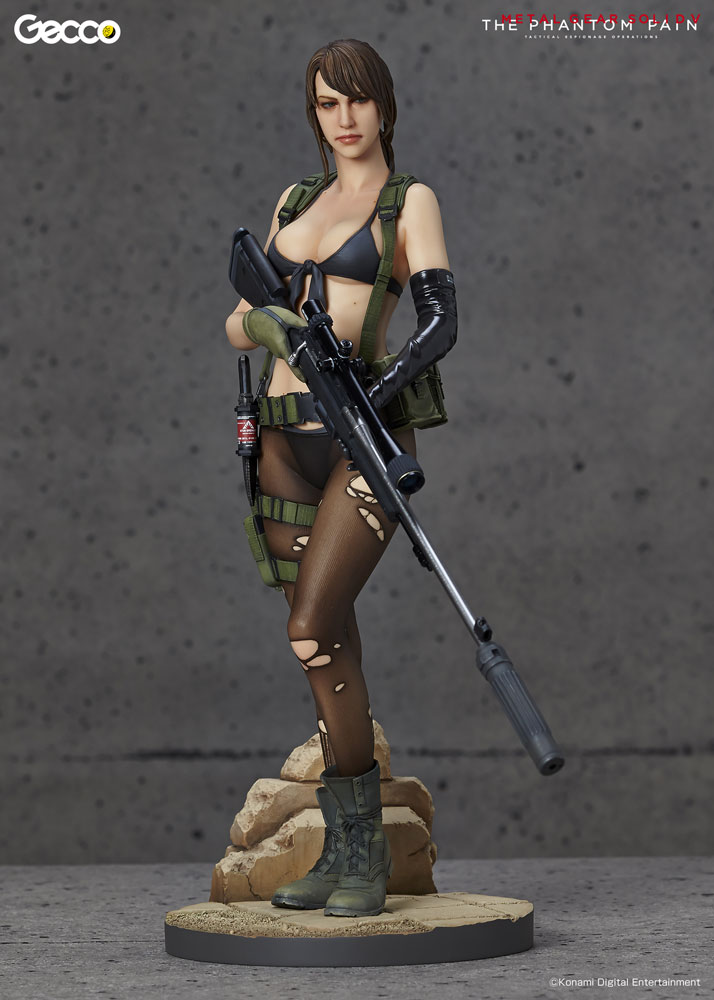 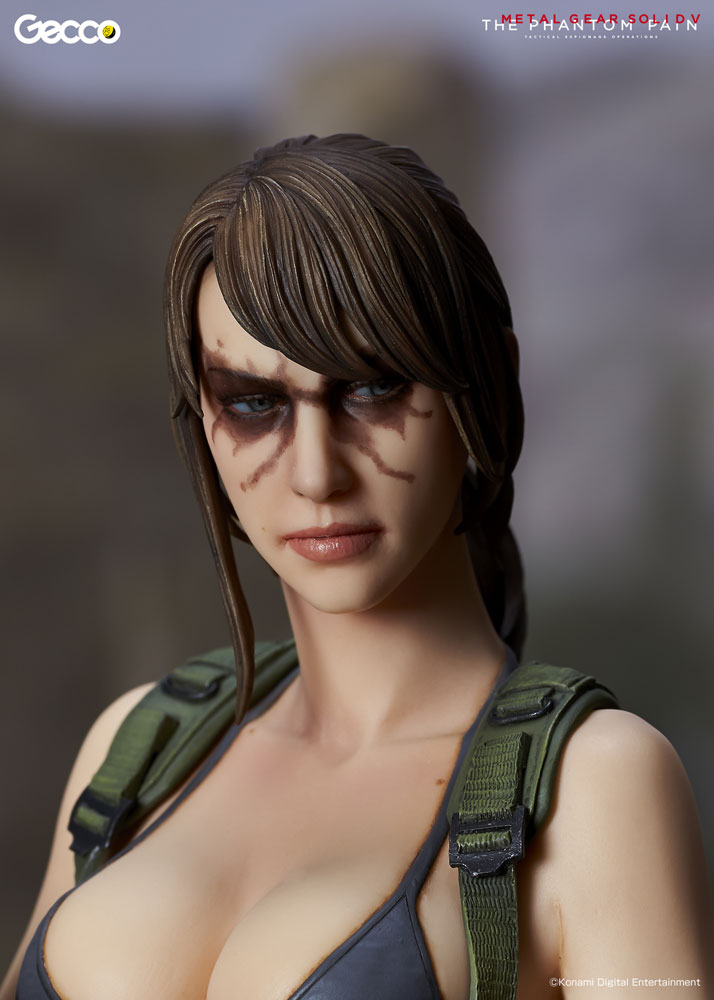 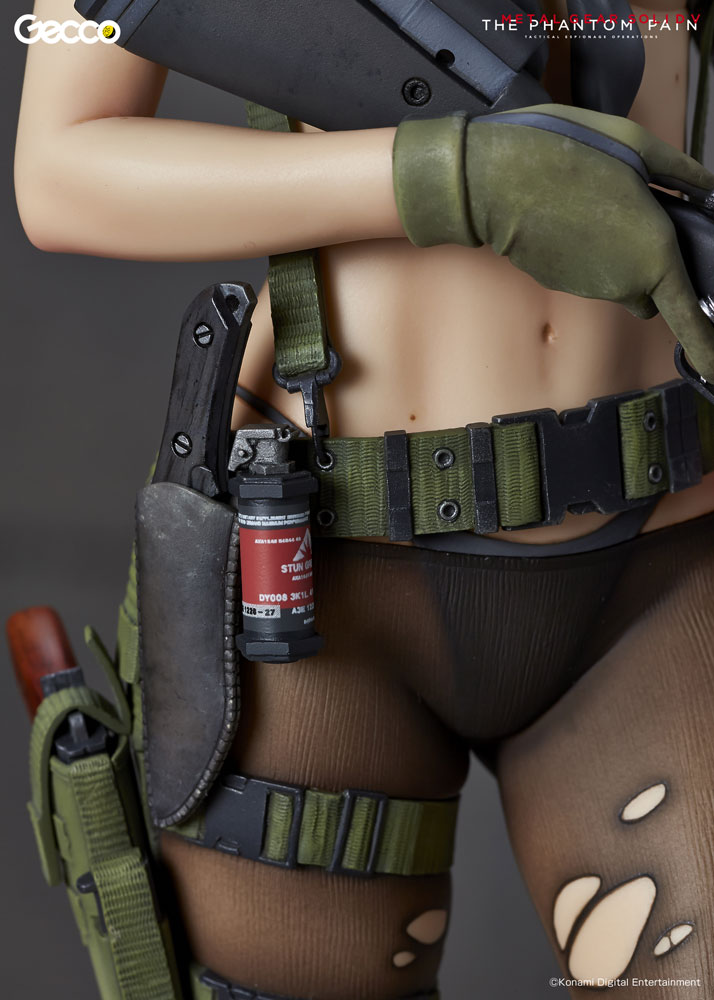 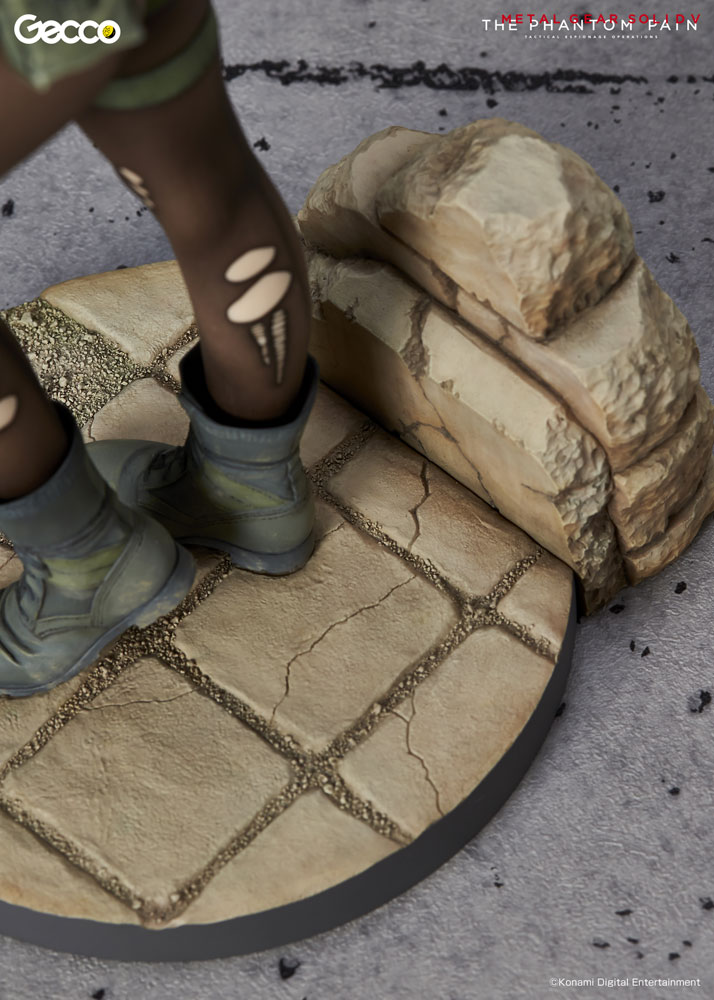 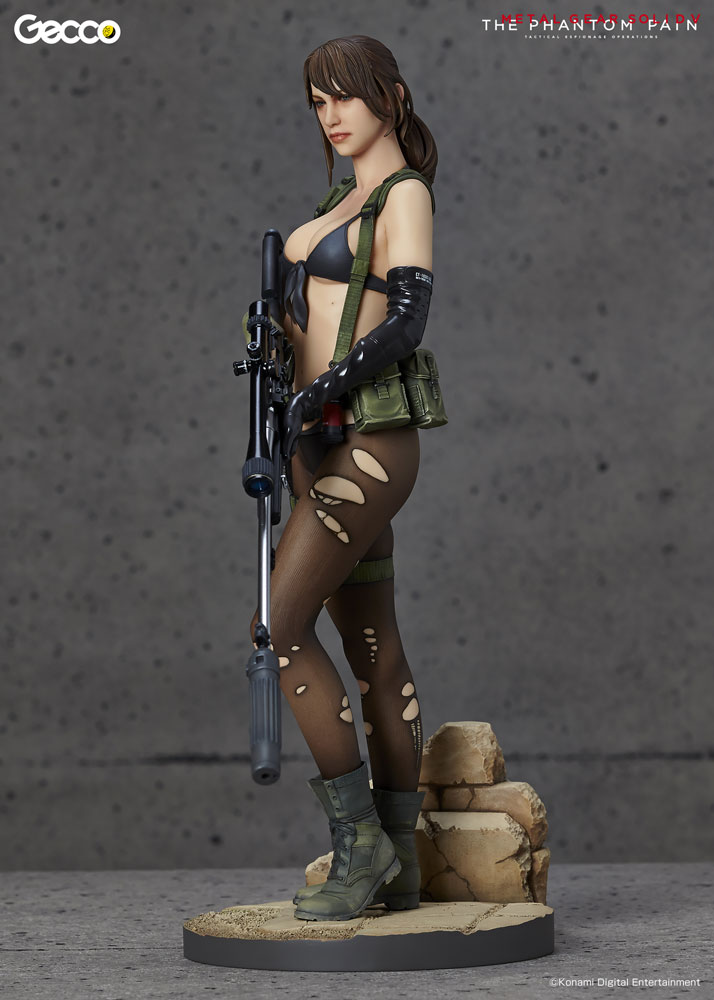 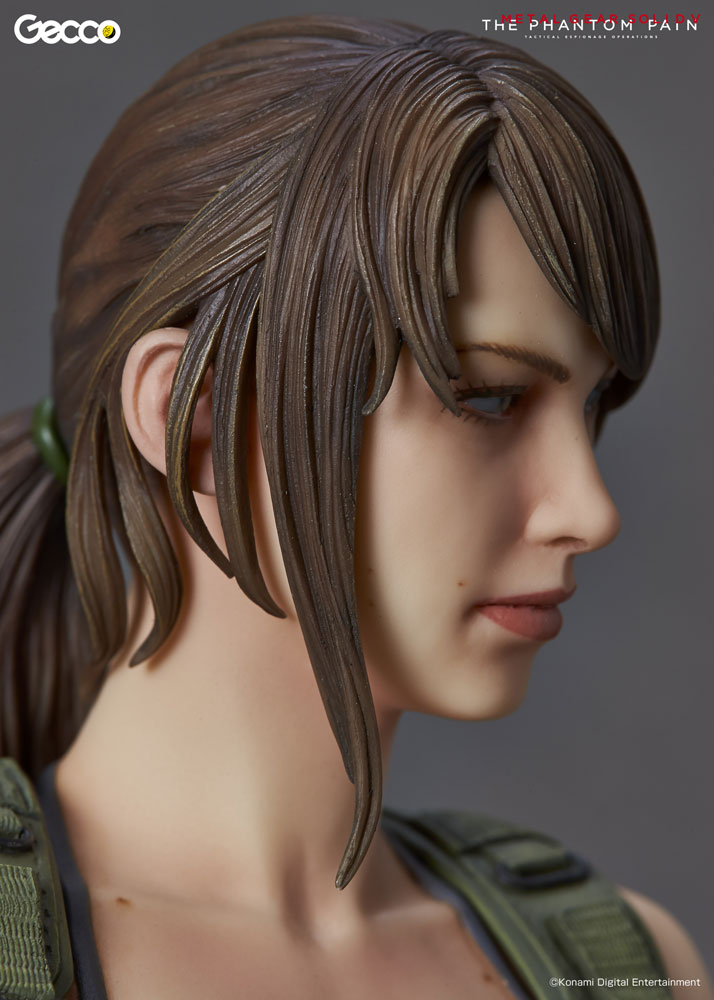 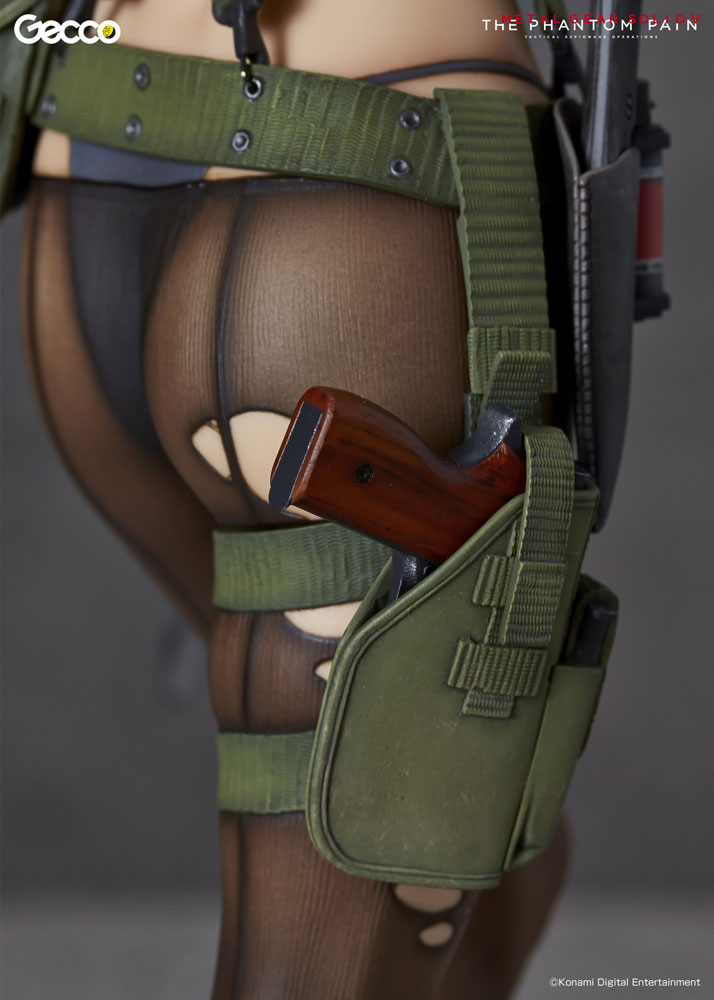 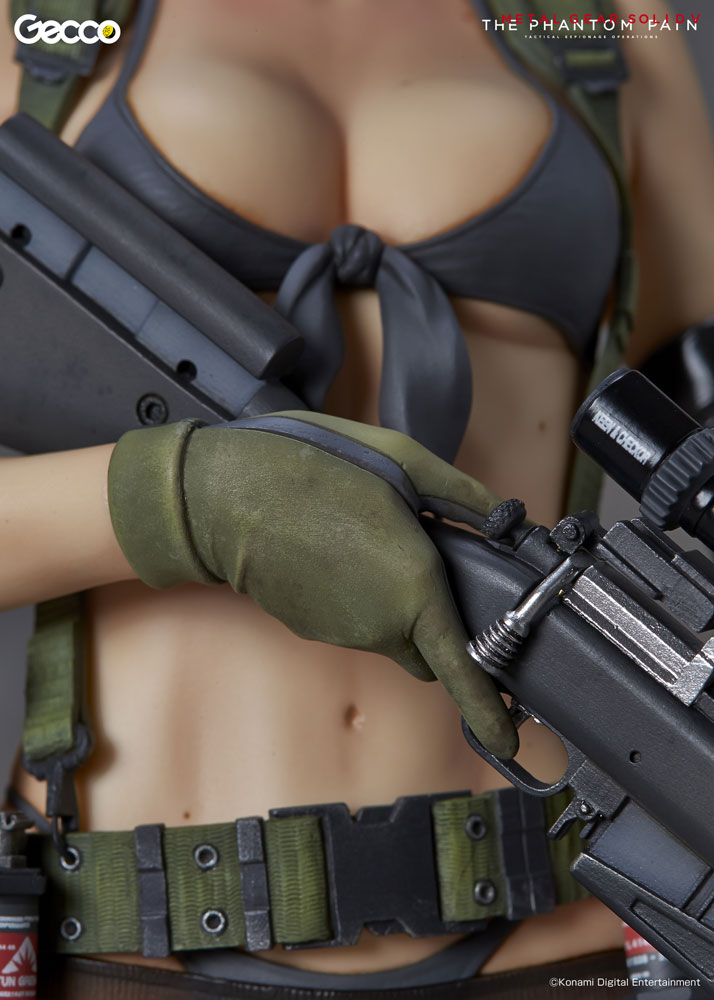